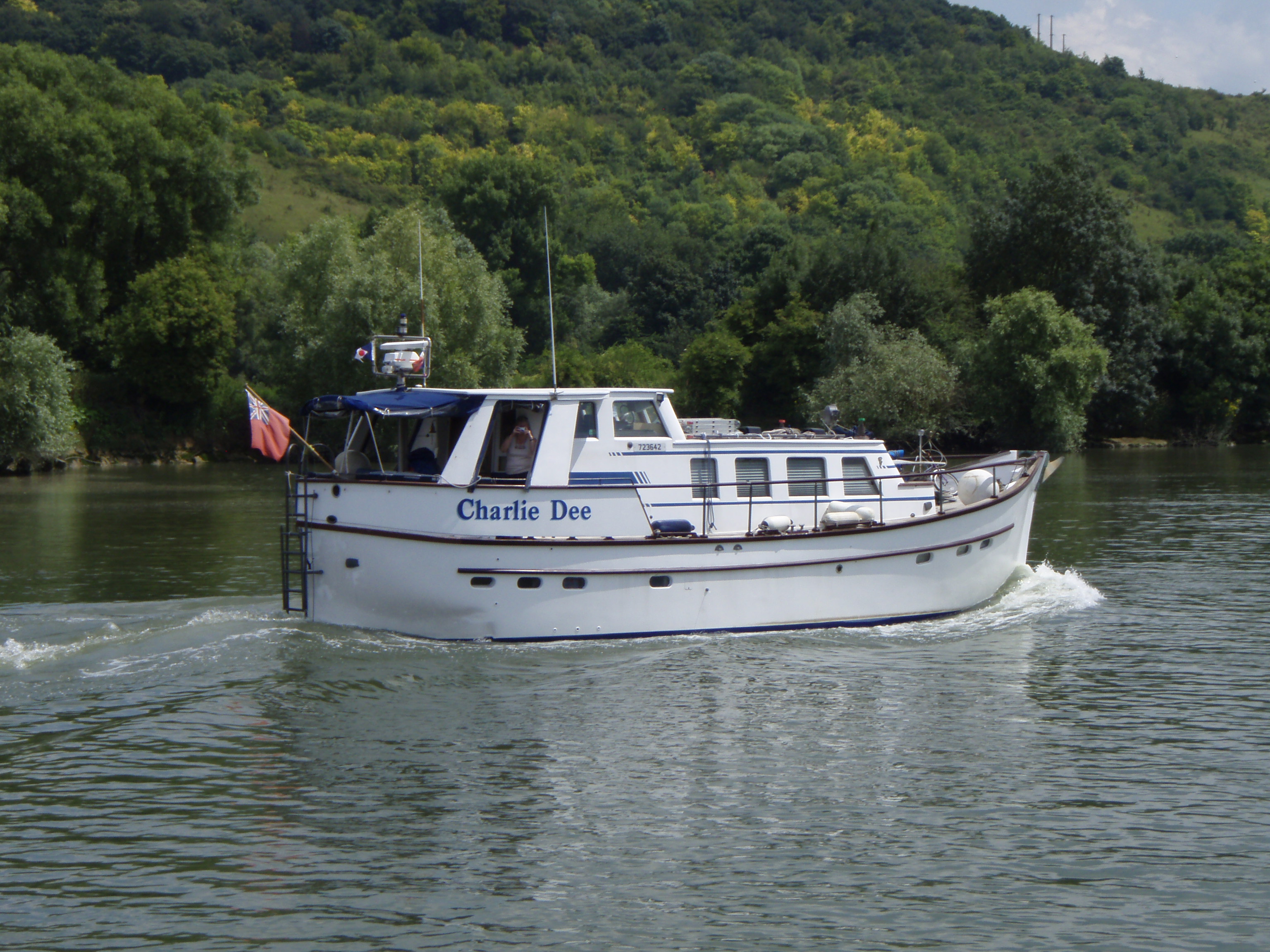 Join us as we share with you the first hand experiences of Anne & Barrie on-board their converted Watson Class Life Boat; enjoying ‘Life Afloat’ & their intimacy with ‘Charlie Dee‘ while they explore new grounds afloat!

My wife, Anne, and I were wintering on our sailing catamaran in Port Napoleon on the Mediterranean coast of France.  We frequently passed a boat on the hard-standing which I found very intriguing.  What attracted me were the strange underwater profile and the sheer bulk of the ship.  Eventually, Anne said that I had better arrange with the broker to view it.  This I did.  On the first visit Anne fell in love with the huge saloon and galley.  We had thought our accommodation on board the catamaran was pretty good for a boat but this by comparison was like a cottage that floated.  ‘Charlie Dee’ had been converted to a very comfortable residential status having previously been a Life Boat with the RLNI.  She was built in 1959 and had served in various locations on the South and East coasts of England; decommissioned in 1988 and converted in 1993.  The previous owner, having had many enjoyable years afloat later confirmed she had proven a very reliable vessel, great for long distance cruising along with an incredibly spacious interior for that perfect live-aboard experience.

We had been planning to continue sailing on the catamaran for another year or so but were finding it more of a strain hauling up sails and all the other physical stresses of ‘proper’ sailing so motor boating appealed to us.  We had been living aboard boats since 1987 and enjoyed the freedom to move around.  This new venture would allow us to extend our nautical lifestyle for longer.

We visited five times.  By that time the broker had stopped accompanying us and just handed over the keys when we turned up at his office.  We became increasingly enamoured with ‘Charlie Dee’ and agreed a price subject to a sea trial.  ‘Charlie Dee’ had been on the hard-standing for two years and I wanted to be sure that the engines worked.  David, the owner and builder of ‘Charlie Dee’, came over to France for the sea trial.  His wife had become very ill and they were unable to use the ship which was his reason for selling.  He took us all over the boat and explained the maintenance required while I scribbled notes.  The sea trial took place on quite calm seas.  David was a bit disappointed when I decided that I was satisfied and we could return to port; I think he was enjoying being on ‘Charlie Dee’ again.  Indeed he stayed on board for a further night after we completed the sale.  I can understand his reluctance to leave as the former owner even more so as he had constructed it.

We took possession of ‘Charlie Dee’ on 4th May 2006, the day after the sale, and spent the next week and a half ferrying our worldly goods from the catamaran to Charlie Dee trolley load by trolley load.  Although our friends in the marina offered to transport our belongings in their van, we preferred to do it bit by bit so that we could work out where to store things in stages rather than have a great pile for which to find a home in one go.  On 15th May, we had lunch on ‘Charlie Dee’, supper and a farewell bottle of Cava on the catamaran and spent our first night aboard ‘Charlie Dee’.  We had arrived!

We spent May and the first half of June 2006, preparing the catamaran for sale: rubbing down, painting, anti-fouling and awaiting the registration document for ‘Charlie Dee’.  It took until 20th June for the latter to arrive.  On 21st June, we started the engines, cast off and set out on our first venture aboard ‘Charlie Dee’.  It was not an ambitious first trip; we moored an hour later in port St Louis basin.  I was used to walking there from Port Napoleon in less time, but the trip had necessitated going out into the Mediterranean and then turning back up the channel toward St Louis.  ‘Charlie Dee’ handled predictably and being quite heavy was extremely stable.

The next day we headed through St Louis lock onto the Rhône river.  All the locks on the Rhône are massive, except this one which has a rise or fall of less than a metre, but it gave us practice in locking with ‘Charlie Dee’.  Anne is brilliant at lassoing with a mooring warp so from the outset we adopted the practice of bringing ‘Charlie Dee’s’ midships alongside a bollard and Anne lassoed the  bollard with a line attached to the midships cleat.  This is the technique which we have used ever since.  Usually, once the mooring warp has been hauled in there is no need to attach bow or stern lines.

We needed to stop at Arles, where there is a VNF office, so that I could buy an inland waterways licence.  There is no proper mooring by the office so I put the bow into the side, scrambled over it onto the river side with a line, tied it onto a rusty chain and climbed up further to the VNF office.  It was closed!  Perhaps there was insufficient business to keep it open?  We did not stop at Arles.  Even the visitors moorings were full – of small local boats.  We continued up river, through the first of the large Rhône locks.  In all the large Rhône locks there are floating bollards set into the lock sides.  Our central cleat technique worked a treat.  As the water rises the bollards also rise emitting a haunting sound reminiscent of the songs of whales.

Shortly after the lock on the left bank, our starboard side going up river, was the small marina at Vallabregues.  There was predictably no room for us inside the marina but we were able to moor outside on the upstream side.  It was a simple manoeuvre as the river current pushed us onto the pontoon.  The only skill was in ensuring that our fenders were not punctured by the odd protruding bolt on the pontoon.

That night and the following morning there was a strong wind so we postponed our departure for a day.  In the evening, we welcomed a 100 year old dutch barge, ‘Leo’ alongside.  In return the Swiss crew came on board and shared a bottle of Champagne with us.  ‘Leo’ is owned by a group who take it in turns to use her, picking her up from wherever the previous crew has left her.  It was a convivial evening.

The next day we went up river to Avignon.  The pontoons and attached boats at Avignon were swept away one winter by the raging river so instead one moors on the quay just above the famous pont d’Avignon, which over the centuries has itself been swept away a number of times.  The crew of Leo were already moored and waved us into a place just in front of them and courteously received our mooring lines.  We stayed in Avignon for three weeks and enjoyed he Avignon Festival which took place in a variety of venues.  During our stay Anne’s elder daughter came to stay and enjoyed the great weather & the facility of swimming off the stern of the boat.  A delighted Dutch woman also came to talk with us, she had recognised the logo on the stern awning which her brother-in-law had made, small world!  9th July 2006 was the day of the France v Italy world cup football match.  Every restaurant in Avignon seemed to have a large TV screen displaying the match.  There was much doom and gloom at the outcome except in a bar just across the road from our mooring which was frequented by Italians. There the celebrations went on into the night.

Thence onto l’Ardoise …. to be continued

‘Charlie Dee‘ is currently for sale & now resides at Brighton Marina.  If you like the idea of enjoying ‘Life Afloat’ & venturing off to new grounds, take a look.