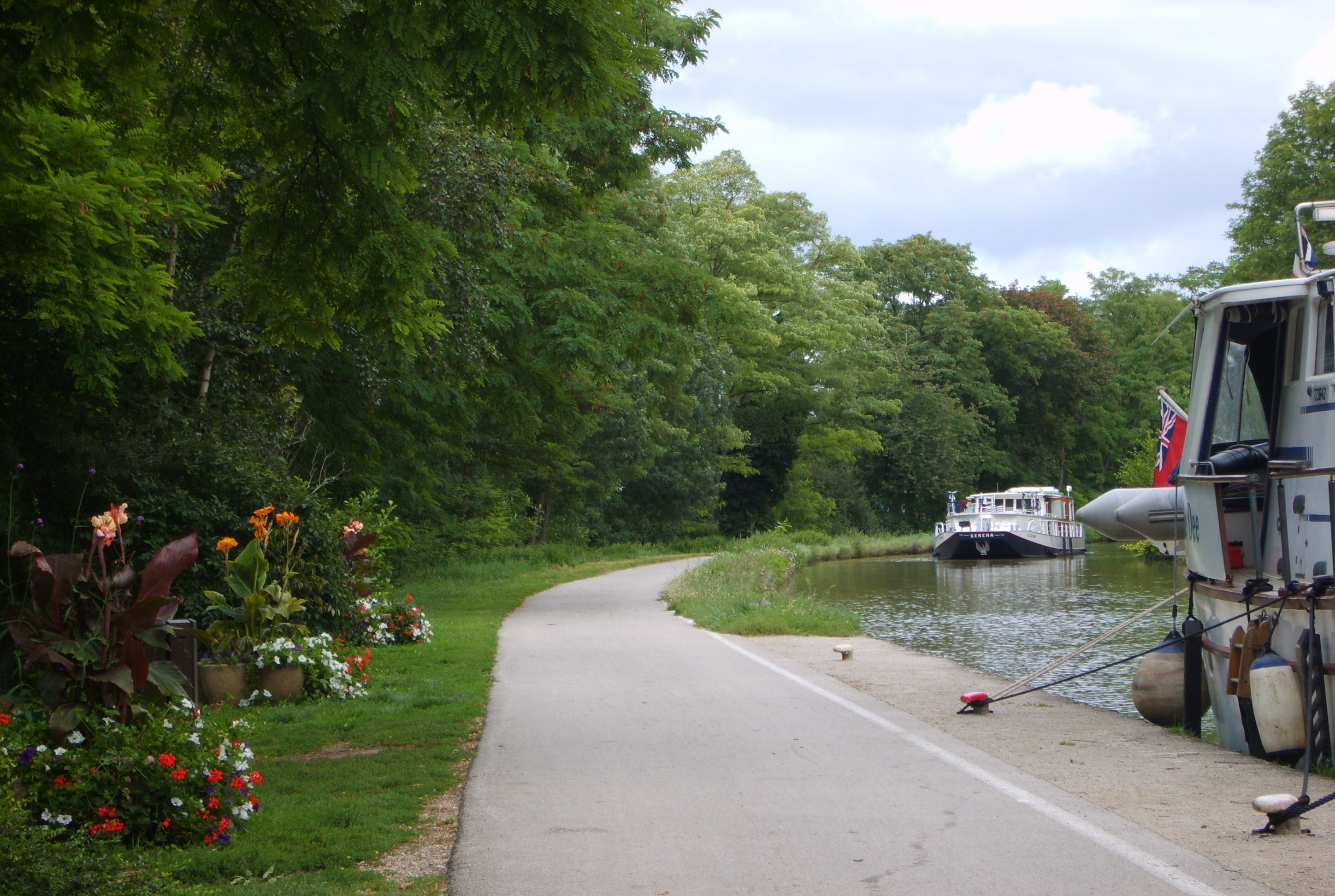 Paris, we are on our way…

Now we had some serious boating to do.  We had decided to winter in Paris and my son was getting married in Coventry in four weeks’ time.

Earlier in the year when we had delivered our catamaran to Paris from Saint-Jean we had gone via the Canal de Bourgogne and done it in two weeks but Charlie Dee would be too big to go through the tunnel at the summit.  We needed therefore to go via the Canal du Centre.

Sunday, 19th August.  We cast off at 09:45 am and headed down river.  Just before Chalon-sur-Soane we swung right into the Canal du Centre and had the usual long wait for the first lock to be made ready.  It is the deepest lock on the canal so there is a lot of water to empty out before boats can get in and there is nowhere to moor while waiting.  Eventually the gate opened and we were able to enter and be lifted up into the tranquillity of the canal system.  After our experiences on the Doubs it was with a sense of comfort that we arrived at Fragnes

The Canal du Centre and the other waterways on the way to Paris have a variety of systems to operate the locks.  Some, of course, are manned.  Others are operated by radar detection of the approach of one’s boat.  Some are operated by pulling or twisting rods suspended over the water on the approach to the lock, but the system we found most tiresome involved making a telephone call the evening before and telling the staff at which lock one would start the next day’s journey, at what time one would be there and at which lock one would finish the day’s travelling.  The whole of the last system of operation was controlled by computer.  I used to muse about the algorithm of the program that allowed for different boats starting at different times in different places and going in different directions along flights of locks the pounds between which varied from a few hundred metres to many kilometres.  Apart from the bind of having to decide the previous day on when one would start and exercising one’s French, the process worked fairly well until some boater, not knowing what needed to be done, just set off and pinched a lock programmed for a boat behind it.  So usually at some point in the day it would be necessary to telephone the control centre so they could reset the system to account for the anomaly.

We travelled every day of this trip:  no rest for the wicked!  It did not prevent us from visiting various places of interest at the evening stop.  For example our next stop after Fragnes was at Santenay where we arrived mid-afternoon.  The mooring there is very pleasant but when we went down the steep hill to the village it was completely closed – not even a boulangerie open.  Ah of course, we were in August when the whole of France goes on holiday.

The next morning we were getting ready to cast off when around the corner came a hotel boat.  Even when going fairly slowly these large craft have the effect of sucking the water from in front of them so that the level drops and other craft can be drawn toward them as they pass.  We kept our mooring warps in place until it had passed and then were held up by it as we followed behind and each lock was set against us as the hotel boat preceded us uphill through the locks.  Eventually we came to Saint Bérain sur Dheuse where there is a wall on the side of the canal against which it is possible to moor complete with bollards.  This is beside a small park-like area which had some flowering mallow in clumps.  We went for a walk into the village and on our return found that the mallow had all been cut down by a workman on a mower.  I have formed the view that French gardening techniques are more about controlling nature rather than nurturing it.  Everything seems to be cut and trimmed in straight lines to within an inch of its life.

The next day we set off and climbed through 17 locks in quick succession in company with a Dutch boat and arrived at Montchanin.  The water was shallow preventing our getting the boat in to the side of the canal so we had to use a gangplank off the side deck to get ashore.

Our start the following day was marred by a German boat which “jumped” out in front of us into the first lock and closed the gates in our face.  The charitable view was that they just did not look back to see a boat coming behind them.  However, we were disinclined to be charitable then particularly as it delayed us by three-quarters of an hour.  Mind you, to be honest we were not going far today – just a three hour trip to Blanzy followed the next day by a four hour trip to Génelard.  Below the lock here the canal swings at a right angle through a large basin where there are moorings for boats on both sides with some electricity and water points.  Génelard was on the demarcation line in the Second World War between Nazi-occupied France and “free” Vichy France.  There is a museum here about the subject, which is worth a thought provoking visit.

From there we made our way to Digoin through manned locks in company with another British boat.  Digoin boasts an actual marina but it was pretty full.  We found a mooring on a hammerhead and had hardly been there half an hour before we were side swiped by a hire boat which had just set off from the base there.  Fortunately, there was no damage.  In order to take a boat on European inland waterways it is necessary to hold an International Helmsman’s Certificate complete with a knowledge of CEVNI, Code Européen des Voies de la Navigation Intérieure.  However, when these were to be introduced the French hire boat industry lobbied the authorities and obtained a concession that their hirers did not have to be so qualified.  In return, the hire companies undertook to provide instruction to hirers in boat handling and the regulations.  I think it was supposed to take about an hour.  On one occasion we watched a hire boat cast off and return ten minutes later to drop off the staff member before heading off for their holiday cruise.

The canal from Digoin leads across an aqueduct bridgeing the Loire river followed by a lock and then we were on the Canal Latéral à La Loire, which loosely runs parallel to the river Loire. The next stop was Garnat-sur-Engièvre where there was room for two boats.  One was already there so we moored on the other side of the pontoon.  We got into conversation with a chatty 62 year old local.  I think he was a bit put out when he learned that we were 69.

Decize, our next stop, is at a junction with the canal that leads down to the river.  We left Charlie Dee moored between a large Dutch barge and a miniscule yacht while we walked down to the town in the valley below.  Then, off again the following day to Cours-les-Barres.  This is a gem of a mooring on the canal and free with room for quite a lot of boats.  In season, however, there are many boats, some staying for several days.  It has a garden setting with an electricity point and water.  We were fortunate to be able to moor as we did not arrive until 7pm after travelling for eleven hours. 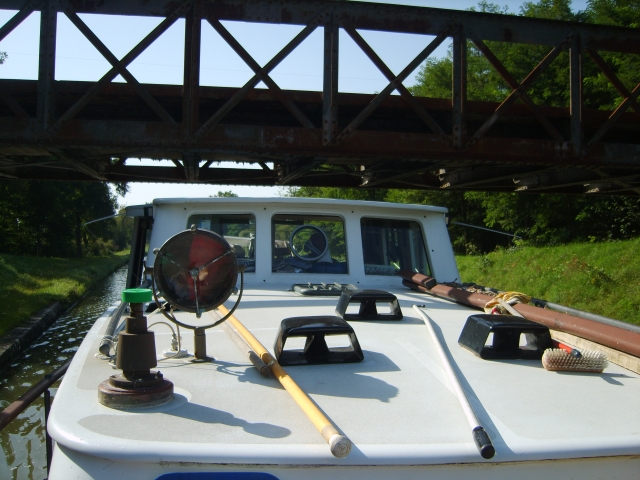 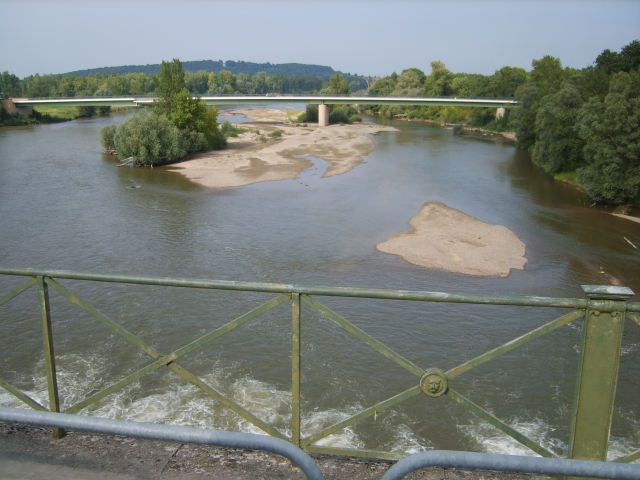 The Loire below the aqueduct 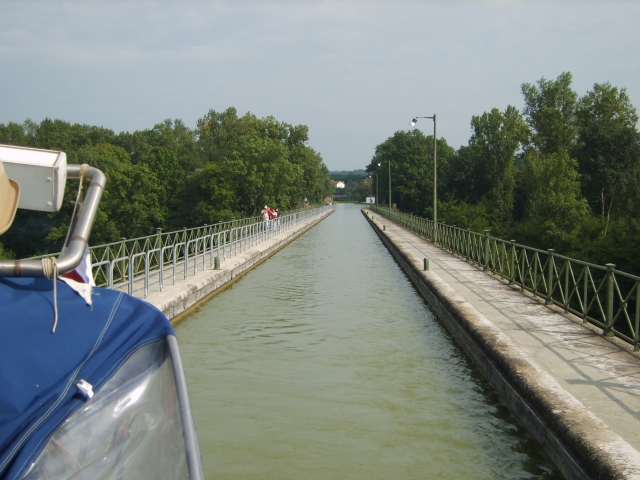 Aqueduct over the Loire