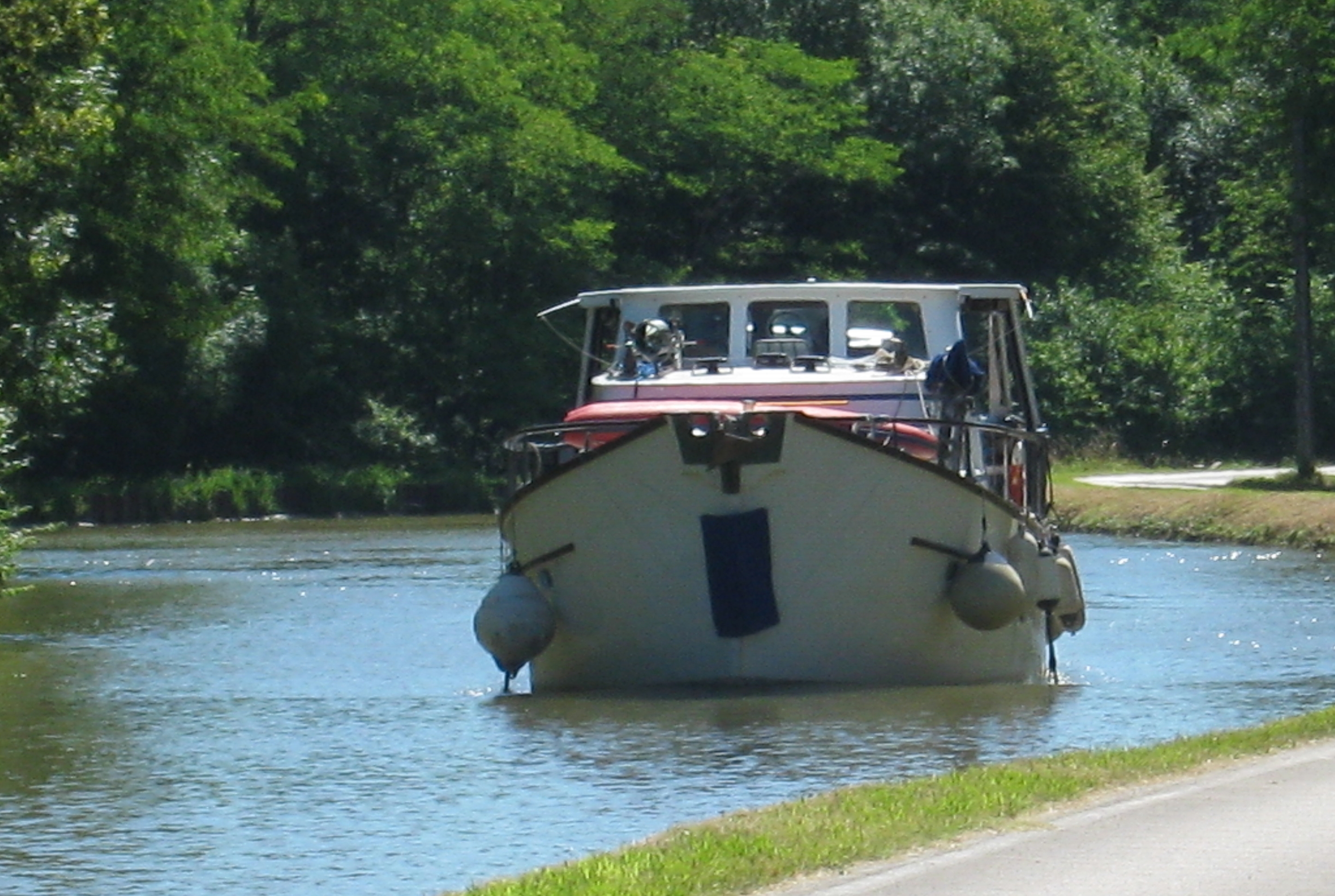 We left Lyons with some reluctance on 15th August 2006 after filling with water at the wall across the river from the moorings.  The bollards in the Saône locks differ from those on the Rhône.  Although the locks are still deep they are not as deep.  The bollards are not floating.  Instead there are successions of bollards mounted in vertical lines inset in holes in the lock wall.  Our way of dealing with this was to have two mooring warps attached to the central cleat.  Anne would lasso the lower bollard and after bringing the boat to a standstill I would join her on the side deck and take charge of the other rope.  As the water rose and the next bollard came within reach I took a bight round that at just about the point where the line slipped off the lower bollard.  Anne was ready to take on the next bollard with her rope.  It was often necessary to use a boat hook to get the line onto the next bollard above as the lower one was about to slip and the boat would have been drifting free in quite turbulent water.  We were vigilant in remembering to wear our life jackets as these were compulsory in locks on both rivers, but the lock keepers of the huge Rhône locks were too remote to make a big fuss whereas those on the Saône often would not proceed with the operation if they could see someone on deck without their life jacket.

There was a lot of rubbish floating in the river following the heavy rain some of it quite substantial.  It is advisable not to run into tree trunks & equally it is helpful not to get a plastic tarpaulin wrapped around the propellers.  However, that is a benefit of having two engines and two props, should one get fouled the boat will still run.

We stopped at Jassans Riottier for two nights and then made the next leg to Macon.  This town has a bypass canal.  Presumably it is to allow larger craft to circumvent the low bridge which spans the original route through the middle of the town.  My reading of the chart suggested that I might get ‘Charlie Dee’ under one of the arches of the bridge but my courage failed me and I took the safer slightly circuitous route.  The marina at Macon was a bit shallow but we managed to reverse ‘Charlie Dee’ into one corner.  We used the dinghy at the stern to act as a fender between us and the quay.  A couple of men took our stern lines while Anne managed to pick up a buoy for our bow line.  Then for the first time (and last), I rigged the passerelle onto the stern and lowered the other end onto the quay.  It was sloped at about 45 degrees and I had to fix a rope that lay along the passerelle so that we could abseil down it and use it to haul ourselves laboriously back up again on our return.  Well after all that effort we just had to go for a walk toward the main part of the town.  It was quite a long way.  Judging from the 100 metre marks along the canal towpath there is a strong rowing club in Macon.  We stayed two nights.  The second day was very hot after a rain-filled night.

We continued our journey the following day until we came to Chalon-sur-Saône.  This has become one of our favourite stops on the river.  There is so much to see and do.  The entrance to the marina is past an attractively decorated bank.  There is a large Carrefour supermarket within easy walking distance – I even bought a pair of dumbbells there on one occasion. Don’t ask!  The main part of the town is on the other side of the river and includes a good internet café.  While I was booking a trip back to the UK on the internet Anne managed to fall through the hatchway in the wheelhouse.  Fortunately, it is above the foot of the bed so she was not damaged and neither was the fly screen that usually covers it.  We make a practice of closing the hatchway when ‘Charlie Dee’ is underway but opening it when not.  Anne forgot that it was open as she moved around in the wheelhouse.

Two days later we were off again up river to Seurre.  On this trip we saw a kingfisher much to our delight.  The marina at Seurre has a pontoon alongside the river bank and a series of pontoons cross wise in the river.  The first pontoon seems always to be occupied or reserved so one has to manoeuvre the boat into the moorings while being swept sideways by the current.  This is best done with panache and the confidence which comes with knowing that one can stop quickly with a good reverse thrust of the engines.  It is also a place where one can be endlessly helpful to hire boaters who are coming in to moor.  August and Seurre seem to be popular with hirers.

Two days later we journeyed for just over an hour and arrived at Saint Jean de Losne.  There are two marinas there sharing a single basin: H2O and Blanquart.  We always moor with Blanquart and managed to get a place without difficulty.

However, it was too early for us to give up cruising for the winter so after three days we headed back down river to Verdun-sur-le-Doubs, a small marina just off the junction of the River Saone and the River Doubs, where we stayed overnight.  We had had rain showers off and on all day but fortunately not while we were in locks or mooring so the crew remained dry.  We explored the town and visited an art exhibition.

The following day we went further down river back to Chalon-sur-Saône, where we stayed in the marina for a week.  Whilst the marina and town are pleasant I should not want to winter there; the flow of the river through the marina is quite fast and would be much stronger in the winter.  We took full advantage of the town, the supermarket, the nearby hardware store and the French markets.  Almost all the villages, towns and cities that we have visited in France host markets.  Some of them are daily, housed in purpose built accommodation, but many are held on one day a week and comprise removable stalls which go from village to village.  These are as much social occasions as the opportunity to buy things.

Thence we went back up river to Seurre for a night.  We moored on one of the cross current finger pontoons next to a British cruiser “Southplace”.  The local supermarket, Casino, was closed for stock-taking.  We visited the Church where a man was playing the organ and then came to talk to us.  With our limited French and his limited English it was surprising how much we managed to understand.

The next day we moved up the river instead of through the lock into the canalised part and came to Le Châtelet where we put down an anchor.  It was a pleasant trip and a peaceful anchorage with plenty of wildlife.  The following day we rowed the dinghy further up river to the barrage and then drifted back with the current eating ham sandwiches.  It was a relaxed day which ending in a nice long swim.