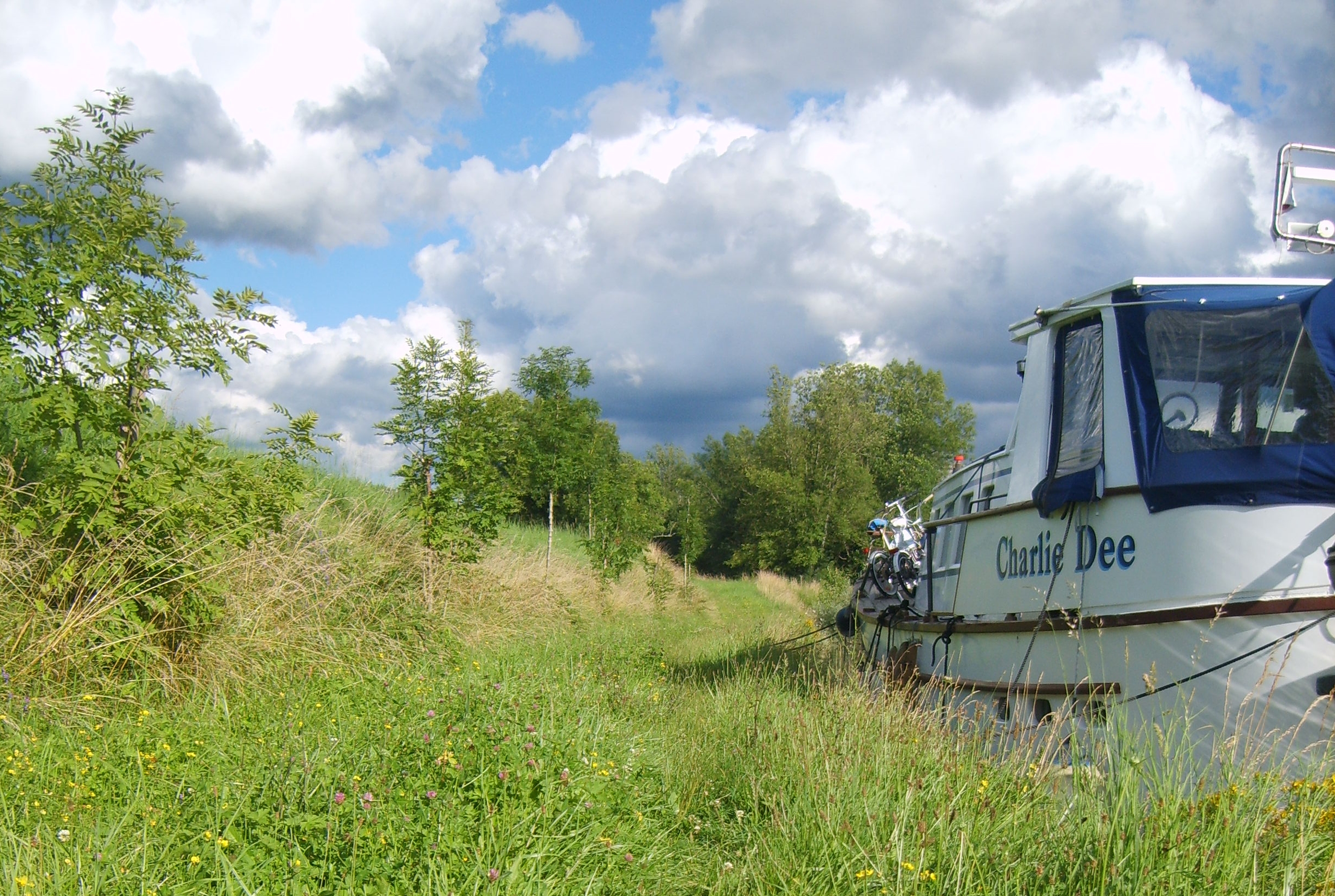 We cast off and bade farewell to Saint-Jean-de-Losne and headed for the Canal du Rhône au Rhin which is a little way up-river from the town.  Even though it was early July there was still a lot of water in the river with a consequent increase in the flow.  The entrance to the canal is a lock set in the left bank of the river and we arrived during the sacrosanct lunch hour so had to moor as best we could beside the lock gates..  When it came to getting into the lock after the lock keeper had finished his repast  I have to admit it took three attempts to align Charlie Dee for entering the lock but we made it eventually by which time there was a small collection of gongoozlers watching.  The first three locks on the canal come fairly quickly, the second and third being self-operated,  and then there is a long pound before the fourth.  We made our way to just above the fourth lock at Abergement-la-Ronce.

The following day we went along the canal to Orchamps.  The interesting bit about this section of the canal is that from time to time it joins the River Doubs which is even more prone to vigorous flooding than the Saône.  This year, even though it was now July the Doubs was flooding with a vengeance.  We put stakes into the bank of the canal at Orchamps and the next day I walked to Ranchot a little way up-river to assess both the security of the mooring there and to look at the state of the river.  There were some boats already moored at Ranchot which has a proper quay with some facilities and even more importantly is guarded from the flooding river by flood gates above the quay and by a lock below the quay.  There was room for Charlie Dee at the end of the moorings but the approach to the lock is along the canal which is separated from the river by a succession of piles and to get into the canal from the river required going through another lock.  The river was so high that it had flooded into the canal but it was possible still to see the tops of the piles.  We stayed in Orchamps for four nights.   On the third night we had a visitor: a small bat took up residence in a plastic funnel I had left on a stern deck seat.  Now bats are a protected species and I know that in England there are rules about moving bats out of their roosting places.  I had no idea what the rules were in France and more relevantly if they were enforced.  Fortunately, the bat stayed with us for two nights.  On the Sunday we again walked along the canal and river to Ranchot where we ascertained that the lock would open for us the next day.  That decided us.  Ranchot was more secure than where we were and provided fresh water.

The following day we pulled out the stakes and ventured onto the river coming out of the canal just above the weir which was very noisy with the amount of water cascading over its edge.  The adrenalin was flowing but I have to admit that it was not as hairy as I had feared.  The first lock keeper had seen us coming and had the lock gates open ready for us so we did not have to hang about in the river below the lock.  There was a bit more delay at the second lock but we found a section to wait in which the water was not so disturbed.  We secured the boat at Ranchot after a short trip of an hour and twenty minutes and for the rest of the day stayed aboard while rain and thunder did their thing around us.  We were stuck in Ranchot but at least the boat was safe from the raging river.

It was about this time that Anne reminded me that some dear friends of ours in Coventry would be celebrating their diamond wedding anniversary in a week and a half’s time and she very much wanted to be there with them.  So here we were in the middle of mostly rural France, marooned by a fierce river and in a village/small town which had little in the way of transport or good communications.  We should have been better off for making arrangements and traveling if we had stayed in Saint-Jean-de-Losne!

Fortunately an English couple on a nearby boat also had their car with them so they kindly took us to Besançon where we were able to book our train tickets in the hope that we should be able to get ourselves there for the start of the journey.

The next day was Friday the thirteenth – obviously not a day to move the boat though there were rumours around that the flood gates were to be opened.  Instead we followed a procession with bands and lanterns (9.30 p.m.) through Ranshot, over the river up a hill into a field.  Lots of young children were carrying paper lanterns with lighted candles inside.  Every now and then one would catch fire.  They just dropped them and calmly stamped the flames out.  I am sure the Health and Safety Executive would not approve.  We were unsure for what we were waiting but at 11 p.m. the firework display erupted in front of us.  The next day, 14th July was Bastille Day so everything was shut and everyone on holiday: another day when one would not move the boat.

We set off on the Sunday.  The canal now was intermittently by passing weirs on the river and most of the travelling was on the river itself.  In each by-pass there was a lock which was now self-operated by the boaters.  It was a pity that the Swiss boat ahead of us at one lock did not wait for us to join them in the lock (there would have been room) but set the gates closing in our face leaving us to fend for ourselves in rather disturbed water.  It was even more of a pity that, after they left the lock, it malfunctioned so all in all we waited an hour before being able to enter the lock.  We put the anchor down while we waited.  We stopped for the night at Osselle and the next day reached Thoraise.  This has an interesting configuration of waterways.  The canal has been cut to avoid a huge bight in the river and includes a lock and a tunnel through the hill on which the town stands.  At the far end of the tunnel one completes a sharp right to continue along the canal.  It was such a pleasant mooring and the day was hot and sunny so we stayed put for another night before making the three hour journey up river to Besançon, where we arrived two days before our rail journey to the U.K.  How’s that for planning?

There is a marina at Besançon, but it is on the river on the far side of the city.  We tied up to a pontoon just by the entrance to another tunnel which again runs through the mountain under the city and it was there that we left ‘Charlie Dee’ moored while we spent the next five days in the U.K.  It might have been safer in the marina but that would have necessitated a tricky voyage past the weir onto the swollen river.  The river was already cascading over an island which usually separates it from the canalised part of the waterway.  It turned out that that was a wise decision.  Some days later the marina staff put all the boat crews in a hotel overnight as they feared the water might become high enough to crash through the marina and damage the boats.  They obviously did not want any injuries or deaths on their hands; not good for business.

Back from the UK & on to Deluz …. to be continued

The Pontoon at Besançon 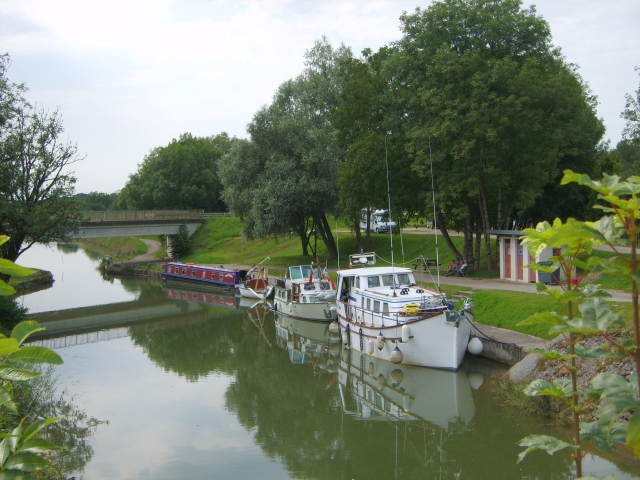 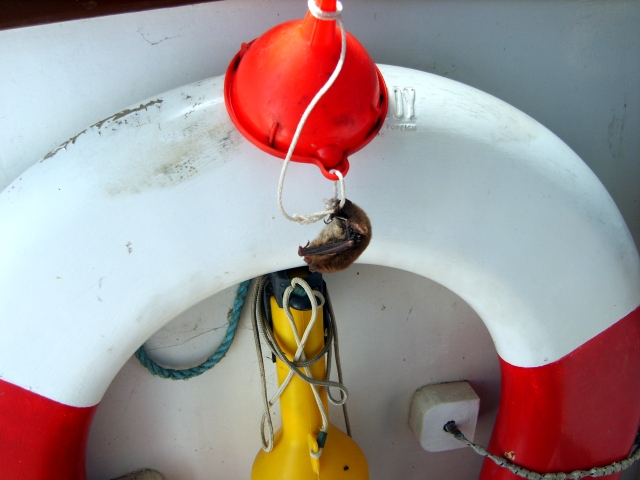