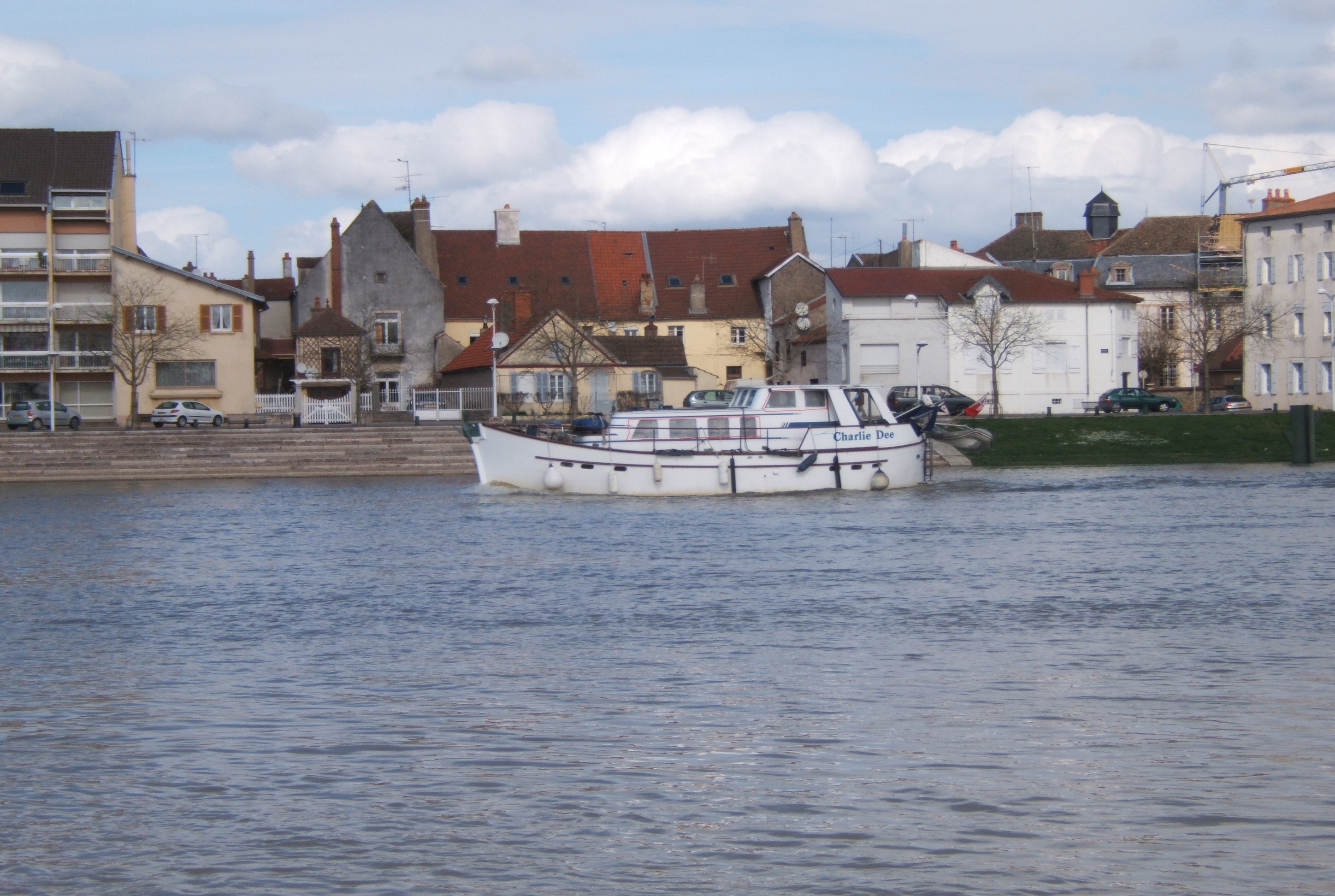 Be warned, Dear Reader, the next part is not an example of good boating and is a cautionary tale about going on the river Saône too early!

It started when we saw that Auxonne was holding its annual carnival on Sunday, 4th March and I had the “bright” idea of going up to the town on ‘Charlie Dee’.  So on the preceding Friday we cast off from our mooring at Blanquart’s marina and set out for our first stop at the fuel pontoon which is attached to the fuel barge moored in the river just above the junction with the Canal de Bourgogne.  When we got out onto the river, had I been a wise skipper, we should have turned round and gone back to our mooring;  the river Saône was in flood with a vengeance.  We approached the fuel pontoon against the strong current.  I could see the attendant sitting in his comfortable cabin with his back to us, so no help there.  Anne lassoed the cleat on the pontoon from midships and managed to take a bight round our own centre cleat.  What we now needed was to get off a bowline.  I leapt ashore to try to do just that at about the same time as the attendant awoke to our presence and came off the barge onto the pontoon, but a bit too slowly.  Things were happening rather fast on the boat.  Anne was unable to prevent the mooring warp from slipping despite the bight and had not the strength to take another turn round the cleat.  I managed to scramble aboard again just as the cleat ripped out of the pontoon and a moment later we were spinning off down river.  The force of the current between the bows of the boat and the pontoon had been much stronger than I had anticipated.

I regained control of Charlie Dee about a mile down river, turned round and headed back to the fuel pontoon for a second attempt.  This time the attendant was ready, caught our bowline made it fast to one of the huge bollards on his barge and then I was able to get a midships line and stern line onto the pontoon.  I bought quite a lot of diesel so whether it was that or the fact that we had sustained a bit of cosmetic damage to our superstructure, the attendant did not make much fuss about his missing cleat.  Anyway with no more mishap we cast off in orderly fashion and headed up river toward Auxonne. ‘Charlie Dee’ has powerful engines and propellers to match so we were able to make progress against the stream of water which was rushing downhill and bearing with it lots of flotsam.  We even managed to avoid the heavy bits of trees that came down our way.

Then we reached the bridge.  This is the one where the D31 road crosses La Saône and it has arches.  The river was pouring through the arches with almost unbounded enthusiasm.  Now I am inherently a cautious boater so I approached the navigable arch of the bridge with reduced revs to feel my way into the situation.  The river was having none of it.  Within a moment the bow of Charlie Dee had been thrust sideways and the boat sent across the river to the far bank and came to rest tangled in the branches of a tree facing down river.  It all happened in seconds.  At that moment I spotted another cruiser, sporting a red ensign, approach the same bridge up river and power its way through against the current.  They only paused slightly just to ensure that we were in no danger but on a signal from me they went ahead.  Okay, let’s have another go.  You may have deduced from this that I am firm of purpose, foolhardy or just plain cussed.

We managed to extricate ourselves from the tree more easily than we deserved, turn the boat round again (this is becoming a habit!) and this time went through the bridge arch with a generous amount of power.  Whew!  The rest of the trip went well.  There was even no difficulty turning toward the lock (where one twists the hanging rod not pull it, remember?) and onto the pontoon.  Unsurprisingly there were no other boats on the pontoon.  Obviously only British cruisers were abroad on this torrent.  I wonder where the other one went.  We were glad to have arrived.

The carnival was brilliant and the weather warm, sunny and dry.  When I say “warm” remember this is March in the middle of the country.  It was well worth the visit although it would have been quicker and less hair-raising by car from Saint-Jean-de-Losne.  This was the preferred mode of travel for quite a number of our friends from the marina.  However, it did mean they could visit us for coffee and cake which was pleasant.

The river was still flooding but the water level was going down gently.  I decided to postpone our return to Saint-Jean until it had fallen sufficiently.  Going through a bridge arch against the current was challenging enough.  To try to do that while being carried helter skelter downstream in a torrent seemed to me too much.  By the following Wednesday I deemed the river low enough to try to return to base and this time without incident we did.  We were glad to be back home and join in with the rest of the communal life again.

That was the last time we took Charlie Dee out until July.  It was not because we had been scared off but because our catamaran had been sold in Port Napoleon and the new owner asked if we would move it to the Paris Arsenal for him.  We had agreed but resisted his suggestion that we should do that in April.  The thought of the catamaran’s engines trying to cope with the Rhône in flood was not to be considered.  It took us a month to make that delivery!

On to the Canal du Rhône au Rhin …. to be continued 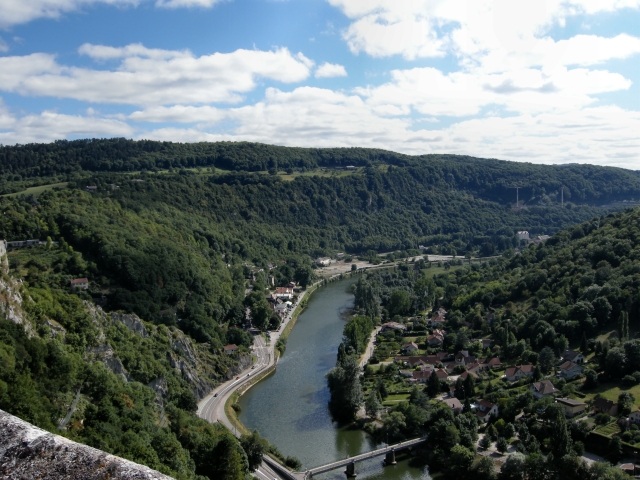 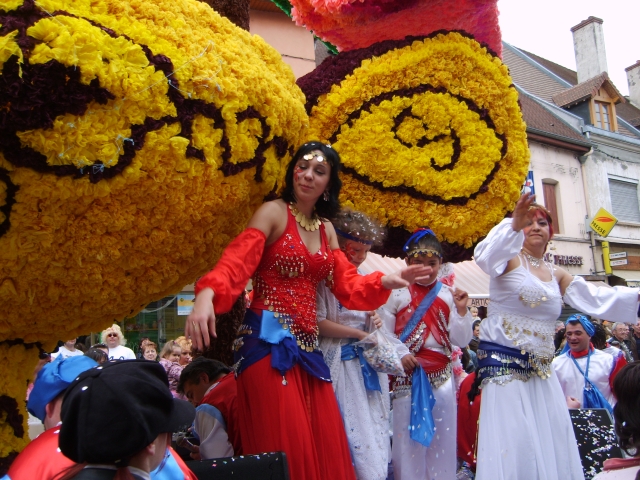