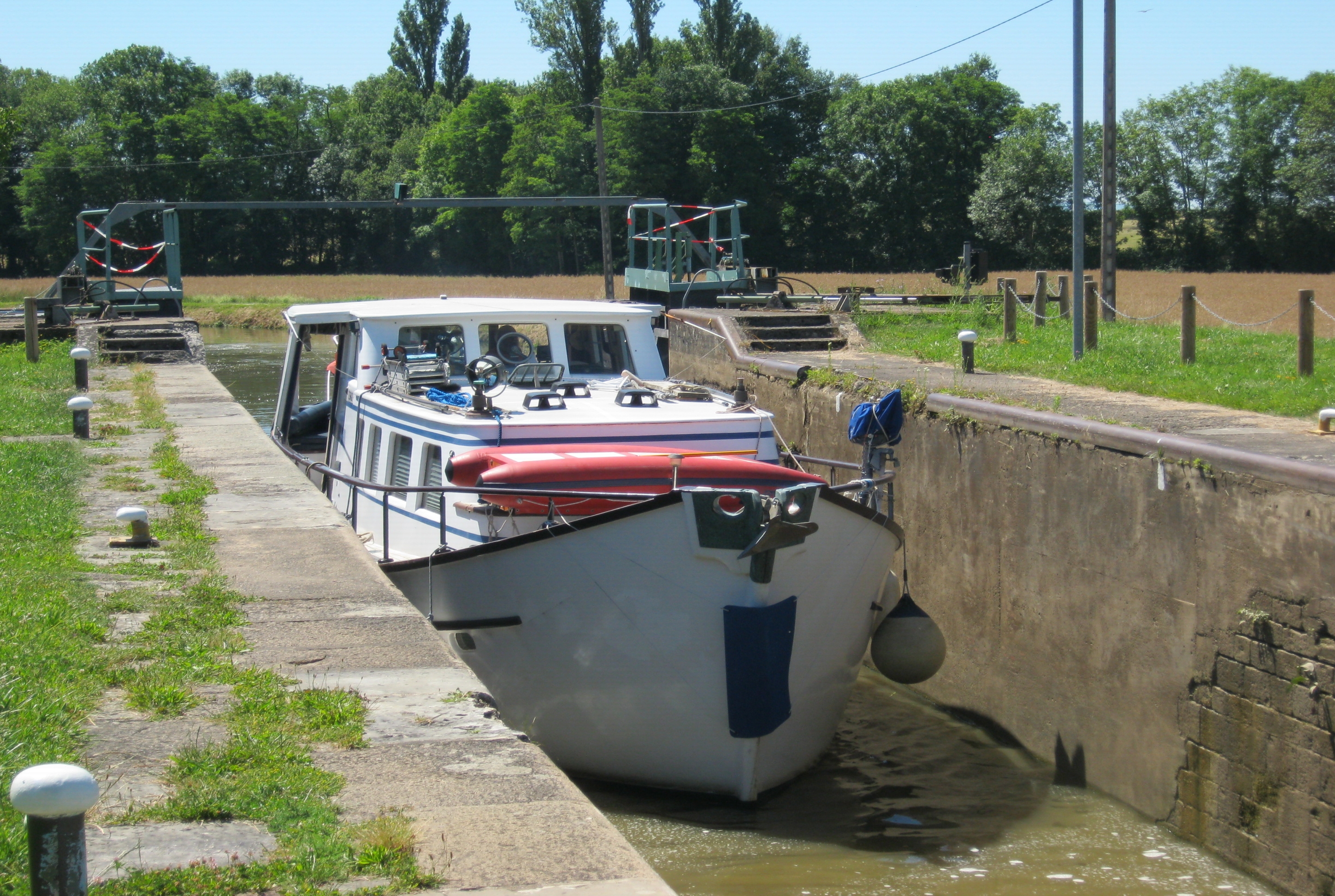 Thursday, 7th September saw us weighing anchor, cruising down river to Seurre and back through the lock onto the canalised part heading back up stream past Saint-Jean-de-Losne and on to Auxonne.  Just before reaching Auxonne we reached the first of the self-operated locks on the Saône.  There are various types of self-operated locks in France.  This particular one was operated by a rod hanging above the channel on a wire.  The boat preceding us spent some time pulling the rod down to no effect (it works that way on some locks) until we signalled to them that they should be twisting it instead; well that was what the notice said and it worked!  The other boat invited us to share the lock with them but I decided we were too long and I was unsure about their competence:  I signed to them the former reason not the latter.  Auxonne provides a free visitor pontoon to which we moored in mid-afternoon.  The next day “Bon Viveur” crewed by a British couple moored alongside us until there was room on the pontoon for them.  We went to the market in the morning and looked over the lovely local Church.  It was on the Sunday; before we cast off that we watched a swimming race in the river.  The winner was, of course, a macho young man, but we were more impressed by the elderly couple who gently swam the breaststroke side by side to complete the course up river against the flow.  We guessed they must both have been in their seventies.  “Well done, the old uns.”  After the swimming came the parade on the other side of the river in commemoration of the liberation of Auxonne in the Second World War.  We attended that together with the fire service (definitely the smartest), a contingent of the army and some uniformed youth groups.  Then we all marched back across the river to another service on the left bank.  I was a bit surprised to see the officers of the army unit smoking while they ‘marched’ or sauntered across the bridge.  Clearly, parades are handled differently in France!  After all that excitement, we cast off in the afternoon and made our way to a forest (Bois de City) above Heuilley, where we tied ‘Charlie Dee’ to a couple of trees and had a barbeque on the bank.  On the journey, we had had to negotiate two locks – neither done well and we damaged part of a rail in the first lock.  What was that reservation I had had a few days ago about another boat crew’s competence – not I hasten to say was ours the crew’s fault it was all down to the skipper.

We did better the next day: nice and gently into the lock, a hot sunny day, good trip, arrived at Gray and grounded ‘Charlie Dee’ in shallow water!  Ah well you cannot win them all.  The next day we eased ‘Charlie Dee’ gently in reverse off the mud and proceeded through the next three locks without incident.  There then followed a long, low tunnel.  Fortunately, the mast on ‘Charlie Dee’ can be lowered so that its air draft is 3 metres 50 which is just low enough for most French canals although we were technically on the river it had its canalised parts including this long, low tunnel.  We managed to get ourselves into the small marina at the far end of the tunnel near Seveux.  There were some noisy campers near the moorings but they did not stay up too late.  All these days of hot weather had been great so why had we both developed bad colds?  We decided to stay put for another night.  We looked at the showers in the marina.  They cost €2.00 and there was no room to dress so we passed on them and returned to shower on board.  The shower evacuation pump did not work: another task on my “to do” list, but not today – I had a cold.  (I have found during 27 years of living on boats that it is good practice to keep a spare water pump available because when they very occasionally go wrong one is not normally anywhere that a replacement can be found quickly.  It is far quicker to just replace the malfunctioning pump.  I have tried using the repair kits available but just finish up with a repaired pump that refuses to work and I usually have a screw or two left over!  However, on this occasion I had neither repair kit nor spare pump.  I think the technical term is Sod’s law.)

Thursday, 14th September 2006:  A three and a half hour trip brought us to just below Rupt lock.  We stayed out of the canalised part of the river that led to the lock and instead laid an anchor in the main river  It is so peaceful to spend time in rural surroundings with no-one else around.

It was raining the next morning so we stayed put until it cleared and then had an hour’s run to Traves where there are individual landing stages in a lake off the main river.  The weather had started to turn from the blazing hot sun of the previous week to days of intermittent showers or heavy rain.  It was time to go back and head for our winter quarters.

From Traves we went down river to Ray-sur-Saône, where it rained so hard the following day that we stayed put and I did some jobs in the engine room like checking the engine seacocks and raw water filters while Anne sorted the guest cabin before we settled down to playing Mah Jong.

Down river again to our previous mooring at Heuilly, except that this time there was a tree in the way.  I am sure it was not there last time.  Eventually we got near enough to the bank for me to leap ashore with a line and even more importantly for Anne to throw me a stern line to pull Charlie Dee in sufficiently for me to scramble back aboard.  We saw some kingfishers on our journeying today: always a delight to see the iridescent flashes of blue and their reddish-brown chests.  Indeed we saw more of them the next day en-route to Auxonne.

From Auxonne we returned to Saint-Jean-de-Losnes to buy 500 litres of diesel (110 gallons in English money).  The price of the diesel here is the lowest I have found on the whole of the French canal system.  I also bought two replacement pumps – one spare.  It has been my practice if something stops working to buy a replacement and a spare against it failing to work sometime later.  However, my experience is that the sometime later does not happen so one ends up with a boat and half a boat of extra spare parts – if only I can remember where I put them.

So we settled into the community of S-J-d-L and the marina.  There is an excellent book swap in the town run by a Scots ex-pat who started with a couple of cardboard boxes and now has two large rooms filled with shelves and crammed with books.  There is a lively group of boaters who hold a daily morning net on the VHF to swap news and weather forecasts and even currency exchange rates.  On Monday mornings walks are held round the area always gathering a mix of French and foreigners.  The walks are supposed to start at 09:30 but each person arriving has to go round the assembled company shaking hands or kissing cheeks three times accompanied by the obligatory “Bonjour”, so we do not usually manage to depart much before about ten to ten.  Actually the boaters have been well accepted by the town folk and even have a special part to play wearing tabards and carrying flaming torches in their pre-Christmas procession.  One of the boaters even played the bagpipes as a decorated barge crossed the river from one side to the other to convey the mayor, other civic dignitaries and Father Christmas.  The piper, in full Scottish regalia, did not know any French tunes some played Scottish ones but his efforts were well appreciated.

We hired a car to drive down to Lyons for their Festival of Lights held every 8th of December.  It was absolutely sloshing down with rain while we were there and everyone was soaked.  I was particularly impressed by the French electricians who managed to run all the lights and sound systems without any malfunction – a major feat.  The festival is well worth attending.  It was difficult eating half a baguette hot dog and holding an umbrella to keep us and it dry.

The next day we discovered that the marina had turned off the water supply and disconnected the pipes along the pontoons for the winter.  The staff did show me a stop cock buried in the ground and I had enough hose to connect with ‘Charlie Dee’ when I needed to fill the tanks with water about every ten days or so.  I am told that the water usually freezes solid in the marina so that one is able to walk across to the island in the middle but not this winter.  We had a film of ice on the water for a few days so thin that a pebble dropped onto it went straight through.  So we concluded our boating for 2006. 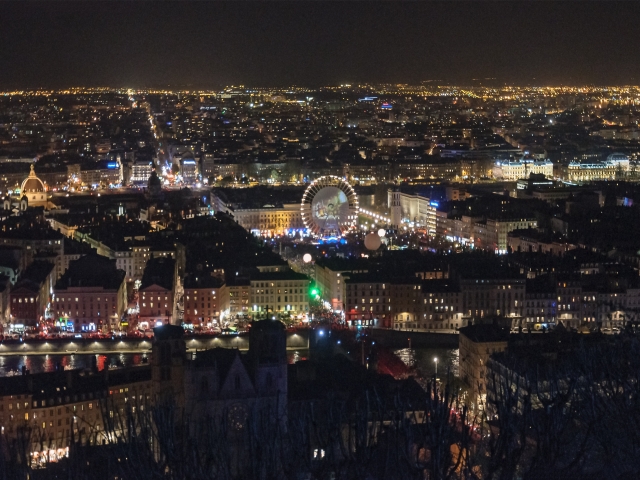 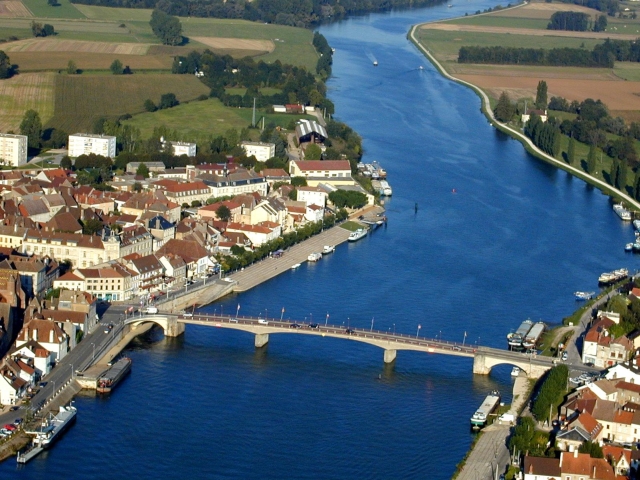